Despite increasing the number of unique wallets and total minted CryptoCitizens in each city, we have seen voting participation decrease for our City Votes. 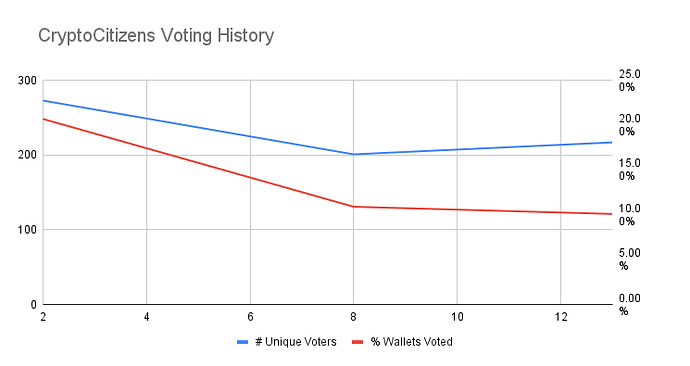 There are three potential solutions to increasing voting participation:

We suggest restricting the airdrop of 333 CryptoTokyoites to wallets that voted on the location of City #8. This will encourage participation in the vote and increase the chances for active Citizens to win a minting appointment from their holding.

Delegate voting (also known as liquid democracy) allows a holder to delegate its voting power to another wallet. This can be used to delegate voting to yourself (e.g. from a vault to a more accessible hot wallet) or to another person (e.g. someone you trust who is actively engaged with the project).

Delegate voting will increase the number of Citizens included in the vote, which reduces the effect of single wallets with large holdings on the voting outcome.

Lengthening the voting period provides more time for communication and marketing around the vote. For Citizens who are less active on Twitter and Discord, a longer voter period will increase the chance that they learn about and participate in the vote. It also helps Citizens who may hold their assets in vaults that are hard to access.

These are all great ideas, Phil. I support moving forward with all three!

all good ideas. happy to vote on these.

good idea i support this

Great ideas, I support all three options are simple and fair IMO.